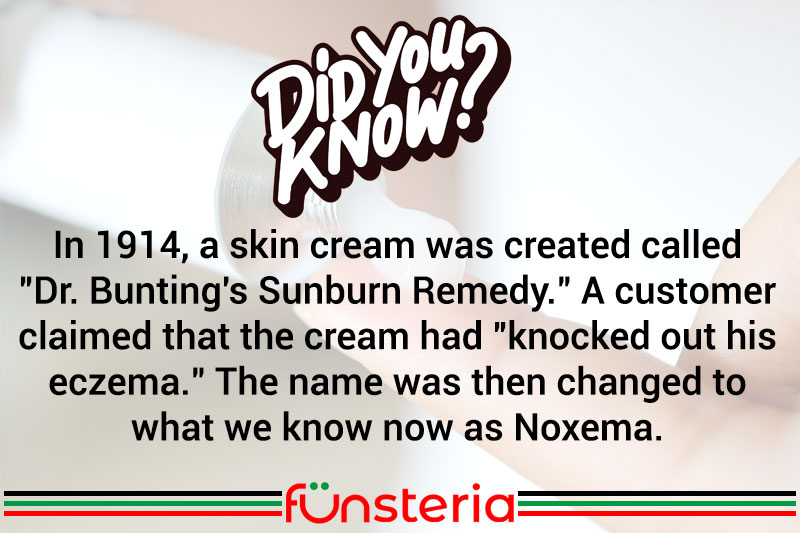 To meet ladies’ demand for a product that would keep their skin smooth and protected from the harsh sun, pharmacist Dr. George Bunting compounded his own ingredients into Dr. Bunting’s Sunburn Remedy. Not only was it a big hit as a beauty product in 1914, but one amazed customer wrote in to exclaim how his sunburn remedy had “knocked out her eczema”. Bunting knew a good thing when he saw it, and promptly renamed his product Noxema.

The first full-fledged factory for the commercial manufacturing of Noxema, was housed in a small row house in Baltimore. But going from your own store, to selling a product to everyone else, wasn’t as easy as it sounds. The new company struggled along until 1923, when it started to turn a profit. Times were so lean, that Bunting paid their bills, which included $27 monthly rent for the factory, with $10 stock certificates.

By the Second World War, Noxema’s business was booming, and grew even more by supplying troops with a cream for their hot, sore feet. They were now running a $4 million dollar a year business in a facility with room for about 1/3 of that kind of production.

Noxema surged forward with the times, building a new 44,000 square foot facility, and when television opened up a new medium for advertising, an estimated 50% of 45 million television owners were learning how to keep their skin soft and smooth.