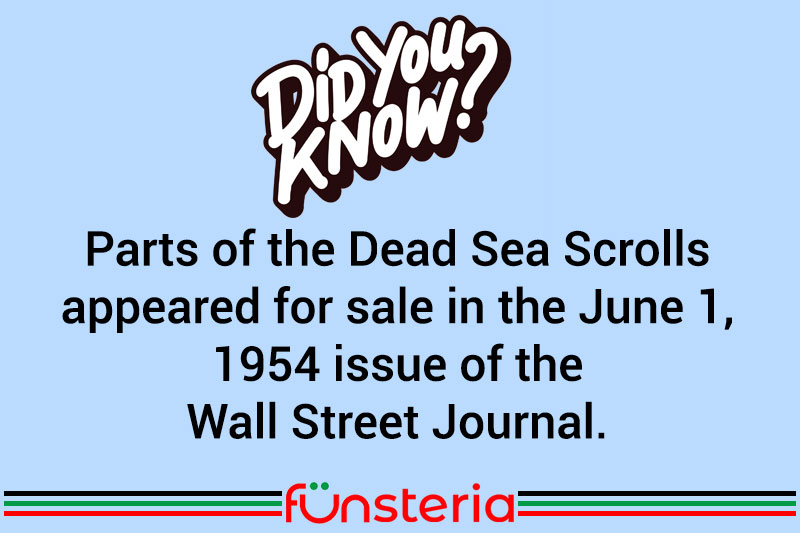 For records of civilization we rely on what those generations before us left behind. Sometimes that is only in the bits and pieces of their daily lives, like pottery from which scientists can determine the contents of wine from thousands of years ago. In more spectacular cases, we are actually left with their words in the form of manuscripts that have survived the ages. The most renowned of these are the Dead Sea Scrolls, which date from somewhere between the last two centuries B.C. and the first century A.D.

Between 1947 and 1956, in a place called Qumran, 13 miles east of Jerusalem by the Dead Sea, 11 caves yielded what have come to be known as the Dead Sea Scrolls, perhaps the most historically important documents in the Christian world. A shepherd, attempting to scare out a goat, threw a stone into a cave high on the side of a cliff and was rewarded with the sound of breaking pottery. When he climbed up, he discovered pots that contained scrolls wrapped in linen.

That first cave yielded only four small documents related to Genesis, community rule and other guidelines for the Jewish life. Subsequent scrolls in the other caves contained multiple copies of both biblical and other texts, including all books of the Bible except Esther. Some were nearly complete, having been written in a carbon based ink on animal skin, papyrus, and sometimes, copper, before they were stored in the pottery jars.

Initially, only the materials from the first few caves were photographed and/or examined by experts. The documents from the first cave fell into the hands of one Mar Samuel, who had them examined by an expert who later tried to buy them. The sale did not go through. Then in 1954, an ad appeared in the June 1 edition of the Wall Street Journal, offering those same scrolls for sale. History did not come cheap. The small fragments were eventually purchased for $250,000.