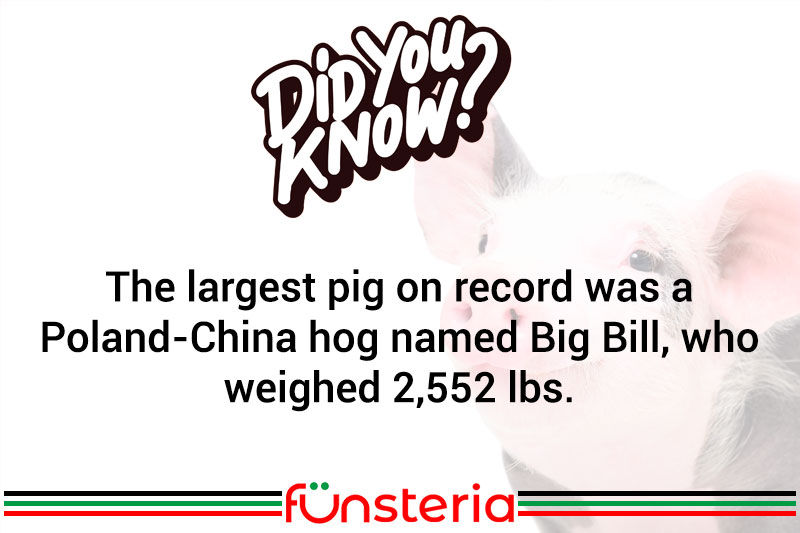 Pity the poor pig, for its undeserved reputation of being a dirty little swine, all because they roll in the mud. They’re not doing it because they’re…well, pigs…they’re doing it because they have no sweat glands, and their only way to cool off is to lower their body temperature by direct contact with cooler substances like water.

Pigs have never quite gotten the credit they deserve for other things either, such as New York’s most famous financial district, Wall Street. Its name is derived from the wall erected there in the 17th century, to contain the local bacon population. Cattle branding would never have seen the light of a campfire either, if it weren’t for pigs, which by law, were required to be branded in Connecticut.

Yes, pigs are a big part of life, no matter how you fry, roast or barbecue them. Some are bigger than others. The largest pig on record, was a gargantuan porker named “Big Bill”, who lumbered around Jackson, Tennessee in the 1930s. Bill weighed an incredible 2552 lbs., and was over nine feet long.

In the way of statues, you have the petite porker (only 600 pounds) on top of the Koender’s Mfg. Plant in Englefeld, Saskatchewan. The precocious porcine is 17 feet long, 7 feet tall, and is constructed from wood, wire, mesh, fiberglass cloth and resin. He is a symbol of the annual Hogfest, and being on the roof, proof that pigs can fly. They really do. Further evidence, is the world’s largest flying pig, a hot air balloon named Ham-let, who is a whopping 100 feet tall, 60 feet wide, and 80 feet long.

Pigs aren’t just pretty pusses either. They are intelligent, and can easily be taught tricks, as evidenced by the Valentine’s Performing Pig troupe of San Antonio, Texas. Their stable of stars boasts the lovely Nellie, four-time World Pig Trick Champion, who also won the $10,000 prize on America’s Funniest Home Videos for her clip titled “Jurassic Pork”.

No doubt Nellie is a valuable asset, but could she match the auction price of $56,000 for a crossbred hog named “Bud” in 1985? He was the most expensive piggy ever taken to market.