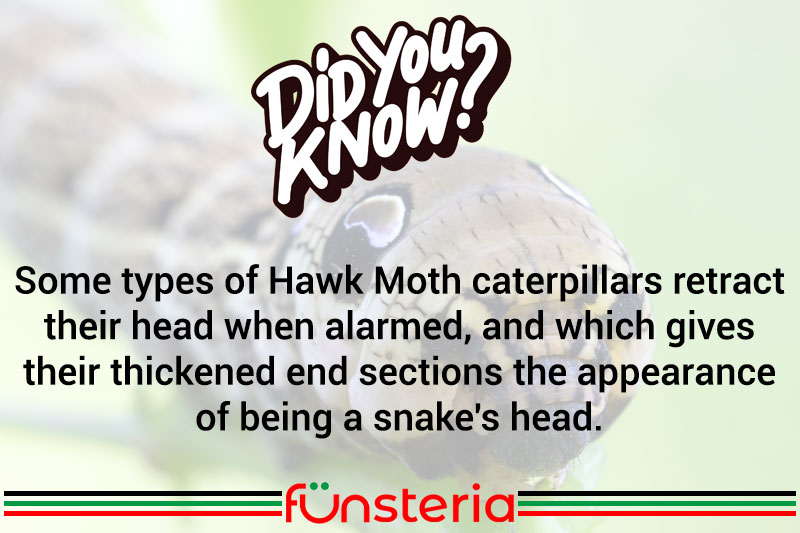 Moths are more exciting than the little white things that flutter out of clothing that wasn’t stored properly. Some of them are incredibly fascinating creatures for their form, colors, size and odd features.

One of the most interesting is the Hawk Moth, with more than 1200 species broken down into about 200 varieties and spread around the world from England to Brazil. They can fly at speeds of 30mph, and may come with wingspans that measure up to six inches across.

Of the adults, two unusual species are the Death’s Head Hawk Moth and the Hummingbird. The Death’s Head pattern appears on three different species that inhabit the Mediterranean and Middle East, and it was often considered a sign of bad luck to have one fly into the house. It is most famous as the cover insect on the psychological horror novel, “Silence of the Lambs”. The Hummingbird Hawk Moth can be found in most of the Northern Hemisphere. Its very long proboscis and ability to hover in the air, means it is often mistaken for its namesake. It is the only known creature able to access the nectar of the Comet Orchid, whose blossom can be up to 12 inches deep.

Even the undeveloped moth has a certain appeal, at least to scientists. Because their actual appearance scares off a number of predators. Hawk Moth larvae have a prominent “horn” on their hind ends, which in the United States, earned the caterpillars the name of “horn worms”. These are frequently found on tomato plants, munching away most of the foliage before they are spotted. Their other end, has a slightly bulbous shape, and when they retract their heads partly into their bodies, it enlarges this bulb, making the waving end of their body appear to be the head of a snake.