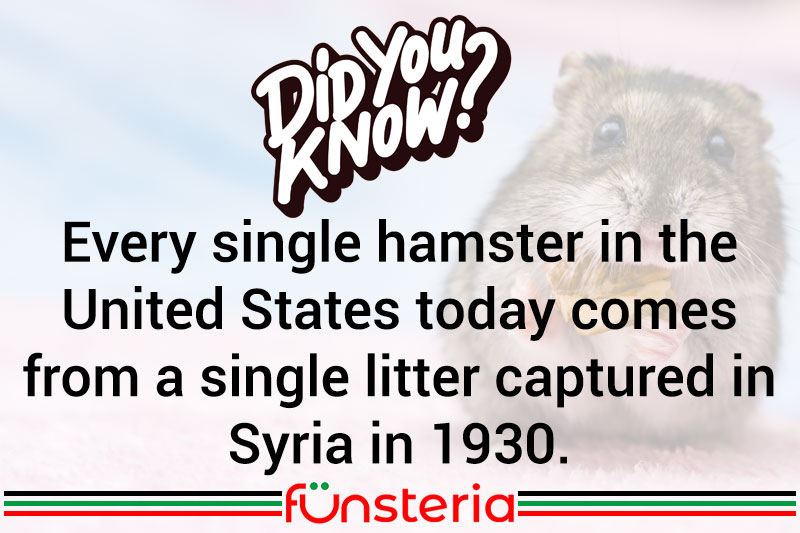 Did you ever wonder how animals or other things end up where they are seen today? Did they travel across land or ice bridges millions of years ago, or were they captured and restrained by the heroic methods of some big game hunter. In the case of the common pet hamster, their history is nowhere near that exciting.

The most common hamster out of the 18 species in their rodent subfamily, are the Syrian hamsters, known primarily as a fuzzy little creature of mostly gold fur, although it does have some variations. The Syrian hamster was found throughout southeastern Europe and the northern part of Syria, from which it spread to the rest of the continent. In 1930, a litter was taken back to Israel, and it’s said that the pet population of America, all descended from this particular group of animals.

Hamsters are the third most popular animal used for laboratory experiments, but is known more for their presence in the rooms of children all over the country. Despite their ancestry as rodents, hamsters have an appealing look, even to skeptical parents, although they also have very sharp teeth that can be used indiscriminately when handled roughly.

The reason America’s pet population of hamsters is so prolific, is that hamsters can become fertile as young as five weeks, and can technically reproduce every two months if given the opportunity. There is some consolation in the fact that keeping hamsters of same sex or even opposite sex together makes for uneasy territorial relationships, so one makes a non-reproducing pet. But that’s only if you bought it from a store where they were segregated. Otherwise, you might be surprised with a handful (5-9) of baby hamsters, about 16 days after they were canoodling under the cedar shavings.