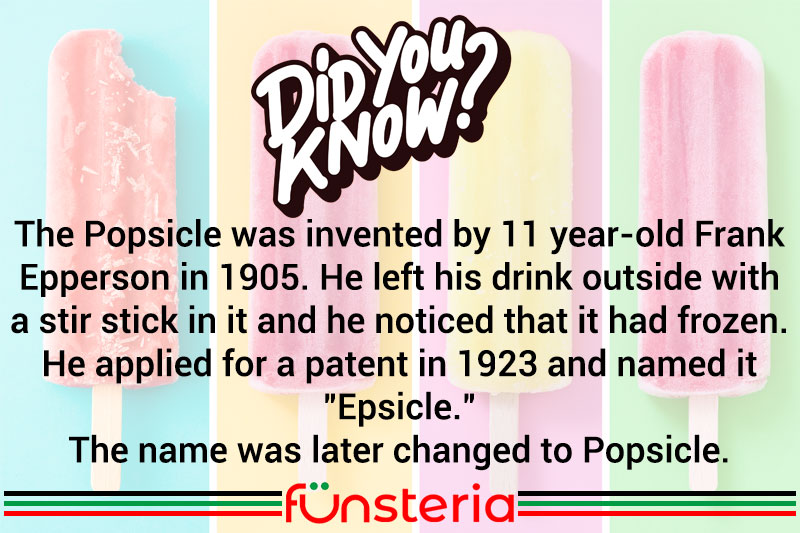 What are you doing with that stick? Do you want to poke your eye out?”

If that isn’t one of the perennial cries of mothers everywhere, it would be hard to say what is. But it’s a safe bet that Frank Epperson’s mother bit her tongue on the words. Because 11-year old Frank left his glass of powdered soda and water out on the steps one cold night in 1905, and woke up the next morning to his drink frozen solid. It was great eating, and you couldn’t spill it.

Frank loved the treat, and so did his friends. But it would be another 18 years before he applied for a patent to the flavored ice on a stick, which with an amazing lack of imagination, he called the Epsicle. But his kids also loved the frozen, fruity treat, and would ask for one of Pop’s sicles, and so we have the most identifiable name in the freezer- Popsicle.

The treats started out as a single frozen tube shape, on a birch stick. During the Depression years, Frank invented the double Popsicle, so that limited budgets could buy one treat and share it between two children. He also invented the Fudgesicle, and Dreamsicle.

According to Good Humor, which now owns rights to the Popsicle (Epperson sold his interests in 1925), cherry is the number one flavor. In 2001 they used 1.4 billion sticks to make the tasty treat. That would be enough to lay end-to-end around the earth, 360 times.