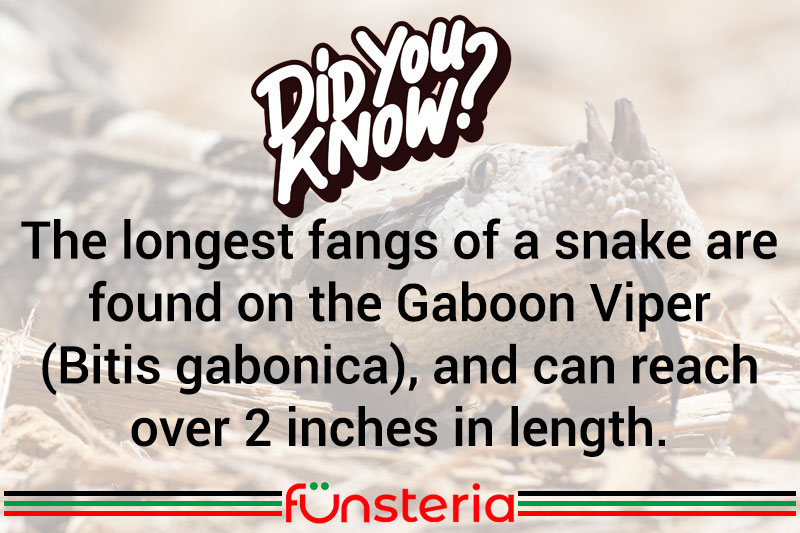 Many people have an aversion to snakes, with the misperception they are slimy, icky things. And they bite. The first two aren’t necessarily true, and the third turn-off is only true in some snakes. Then again, not all snakes that bite are dangerous. But if you’re afraid of snakes to start with, that won’t matter much.

If there is one dangerous snake that a person should fear, it is the Gaboon viper. Not only does it bite, but that bite is more deadly than almost any other venomous snake, for several reasons.

The threat a snake poses, depends largely on whether you are ever going to run into one, and as a native of Africa, we aren’t very likely to annoy the Gaboon unless we go there and tease them. Like many snakes, they are a relatively calm species, but are capable of great bursts of speed, which means they can strike when you least expect it.

Venomous snakes have fangs through which they inject poison into the body of their victims. Gaboon vipers have the largest fangs of any poisonous snake, measuring just over two inches long on a six-foot specimen. But a combination of things determines how deadly a snake is.

Not all snakes inject venom as soon as they bite. It’s possible to pry off the coral snake before they manage to get the venom through their fangs. That’s because theirs are relatively small, and so are the openings in them that releases the poison. They also have small venom glands.

None of this applies to the Gaboon. While medical experts often recommend waiting for signs of poisoning after a snakebite, there is no such caution with the Gaboon, mambas or cobras. They have large glands, large openings in them, and their fangs are capable of delivering the poison deeper into tissue and veins.