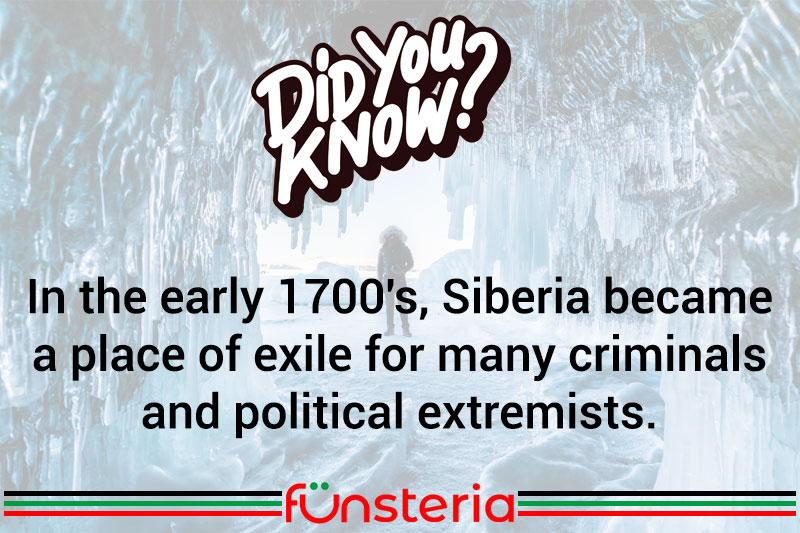 While it became a classic joke to refer to being exiled to the frozen wilds of Siberia, for more than 200 years it was a harsh reality for Russian criminals and political dissidents. But in the late 1700s, there was little in that region of Russia except snow, ice, and the bitter cold, which can range anywhere from -31F to -128F, depending on the region and altitude. Those who were exiled to Siberia, were quite literally lost in the wilds, and usually died there, either from exposure, or sometimes starvation when supplies could not reach the prisons.

Siberia is a large region, bordering on several countries. Today, there are more than 30 ethnic bases for the population of the region, something that resulted from the free and unhindered nomadic life of herders and hunters traveling the vast land that is bigger than Canada, the world’s second biggest continent.

The country that most people think of as Russia, is actually only 25% of it, with Siberia making up the other 75% of Russia’s land mass. However, only 23% of Russians live in Siberia, which today is a vastly superior place to what it was when prisons dotted the frozen landscape.

Once the Trans-Siberian rail line was established, settlements grew up along it, knowing that there would be regular contact with major centers for supplies. Gradually, those small towns developed into larger, more modern cities.

But it is still a vast, mostly uninhabited land. If you stand on the east coast of Siberia, you will be further away from Moscow, than someone who is paddling in the water off the shore of Maine.