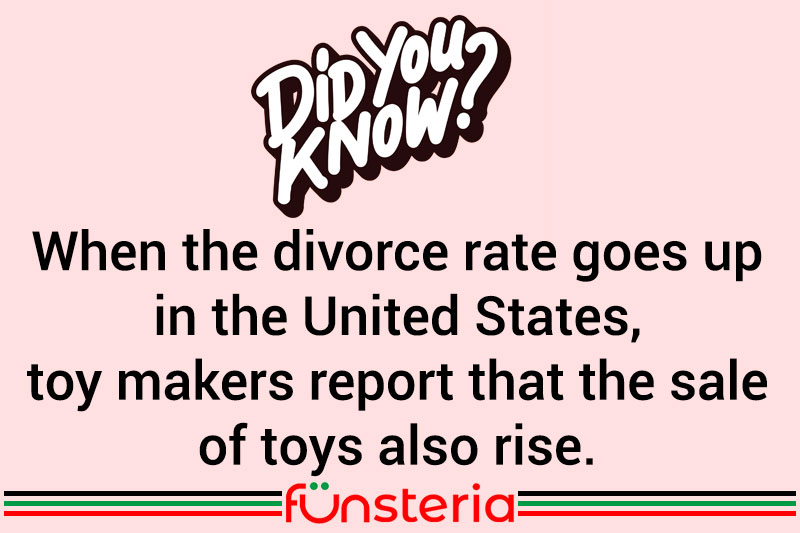 Generally when couples divorce, the details you get are the “dirty laundry” kind. Every last miniscule scrap of who did what to whom and why. But gosh, there is a larger picture here to Splitsville, and this is just some of what you may not know.

The countries with the lowest rate of divorces, per thousand are (in ascending order): – The Vatican 0.0 (like this is a surprise?) – Guatemala 0.15 (A poor country where lawyers aren’t going to make out like bandits) – Macedonia .27 (Did you ever wonder how someone gets 27 hundredths of a divorce?)

The top states in America for divorces are: – Texas (Well, everything else is big. So are the marital/palimony settlements.) – Florida (Amazing, considering the age of the part time residents) – New York (The Big Apple, where Eve catches someone else offering Adam a bite.)

Economist Robert E. Lucas won the 1995 Nobel Prize in Economics “for having developed and applied the hypothesis of rational expectations, and thereby having transformed macroeconomic analysis and deepened our understanding of economic policy”. His wife won half the cash prize involved, because in their 1988 divorce agreement, she had her lawyer insert a provision that he would split any Nobel cash award won within the following ten years. It was, apparently, a rational expectation.

Until the first British divorce court was established in 1857, the only way a divorce could be granted, was by act of Parliament, something that cost about 3,000 pounds Sterling, or $42,000 in today’s money. So men often reverted to the age-old custom of selling their wives. Yes, that’s what we said…selling them. A wife was taken to the local market, often with a rope around her neck, and her virtues extolled. When a bid was accepted, the rope was handed over to the new “owner”.

In America, the toy industry has a vested interest in the divorce rate. Why? Because when a family separates, there is often a rush to buy children’s affection with gifts. But more because when a new family unit forms, there are now two sets of parents, and four sets of grandparents for gift-giving occasions.