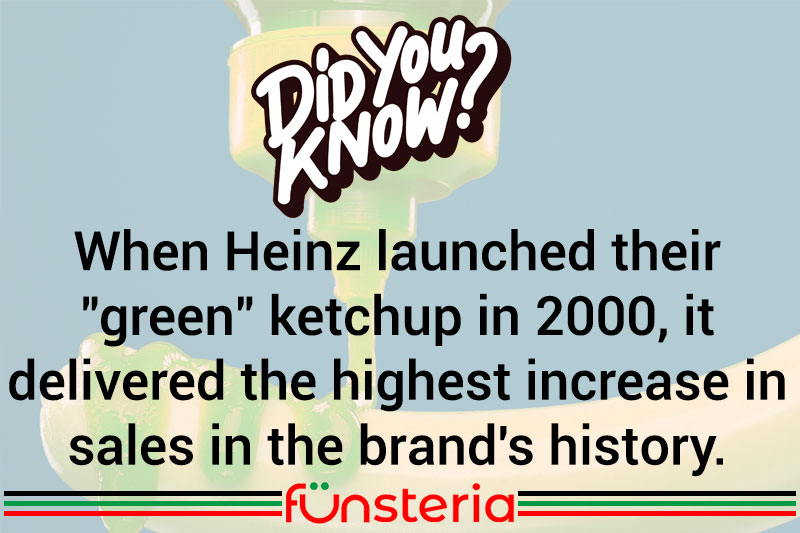 At one time, psychologists theorized that using dark blue plates, cups, etc. would serve as an appetite deterrent since blue on foods, is ingrained in the human mind as meaning it has gone bad, rotted, or turned moldy. On the other hand, bright colors have always been held up as mood elevators. So is it any surprise that sooner or later, the marketing gurus for various products that could be sold for consumption by children, would seize on the idea of color to crank up sales?

It started with things like Lucky Charms cereal, and the pastel colored marshmallows in amongst the grain based pieces. The Kool-Aid company ramped up their products by adding brighter and more diverse ranges of color and flavors. Then there was the ketchup.

Being made of tomatoes, you’d naturally expect ketchup to be red, wouldn’t you? But in 2000, the Heinz company launched the first of its colored products aimed at appealing to the youngsters who would pressure their parents to buy that one, and not red. And it worked. That year, Heinz enjoyed the biggest sales increase for ketchup in the company’s history.

Are colored products a good thing? That depends on what is in them. Besides the concern about dyes that produce colors in foods, there is always the basic content to check, including sodium, sugars, and fat. Sometimes what looks best on the outside, is not what’s best for your insides.