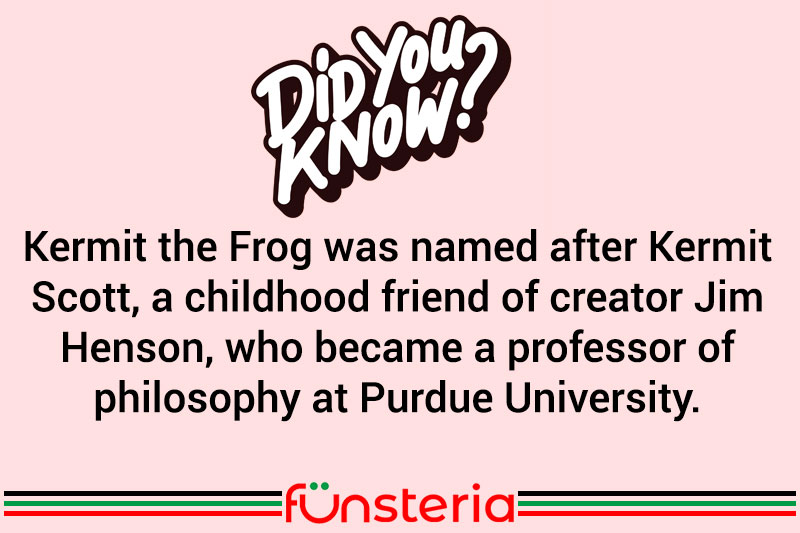 It’s a long way from the garbage can to the bright lights of television and the movies, but that was the path taken, in a rather circuitous way, by Kermit the Frog.

Kermit has been the central figure of the Muppets, and icon of the Jim Henson Company since 1955, when he appeared as a lizard-type character on a five minute television show called Sam & Friends. Jim Henson, the mastermind behind the most popular puppet characters ever, had made his “muppet”, from a green coat that his mother had thrown in the garbage. Add two ping-pong balls for eyes, and voila as the French say, you have a star in the making.

Henson refined the character, naming it after a childhood friend, Theodore Kermit Scott, who today is a professor of philosophy at Purdue University. Kermit’s rise to fame was a steady one through the 1960s, with appearances on Ed Sullivan and other shows, and then a steady gig on Sesame Street in 1971. After that, it was all gravy in the frog pond, as the Muppets, led by Kermit, enjoyed a long run of their own show, and several big release movies.

After the t.v. show ended, movies and re-runs kept the characters alive, as did Kermit’s many personal and public appearances. In 1979, he hosted the Tonight Show for Johnny Carson, and in 1994, an April Fool’s joke saw him replacing Larry King on his CNN show. Kermit has also been honored as Grand Marshall of the Rose Parade, and been the recipient of several university degrees.