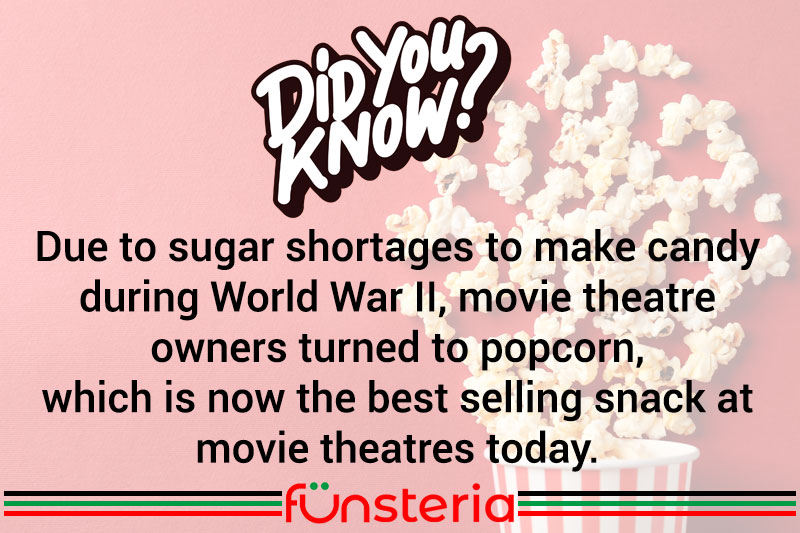 Bet you thought popcorn was an invention of movie theatres, didn’t you? If you did, you were way off base, although it was used for various entertainment purposes, popcorn actually dates back several centuries in the “modern” world, and possibly beyond that.

When Spanish explorers came to the Americas, the Aztecs showed them a most unusual sight. At a ceremony dedicated to the Gods of fishermen, one Spaniard recorded “They scattered before him parched corn, called momochitl, a kind of corn which bursts when parched and discloses its contents and makes itself look like a very white flower; they said these were hailstones given to the god of water.”

Nearly a century later, this report was made of Peruvian indians: “They toast a certain kind of corn until it bursts. They call it pisancalla, and they use it as a confection.”

And that’s how Americans began their love affair with it in the late 1800s, when street vendors pushed carts serving hot, fresh popcorn to pedestrians and visitors to local parks. In the 1900s, its popularity grew in direct proportion to its cheapness compared to other candies, and also thanks to wartime rationing, which meant that sugar for sweets was in short supply, and what money a family had for treats at the movies, stretched further with popcorn.

Not long after, the first microwave heating experiments would be carried out using popcorn. And by the 1990s, sales of microwave popcorn would exceed $240 million.