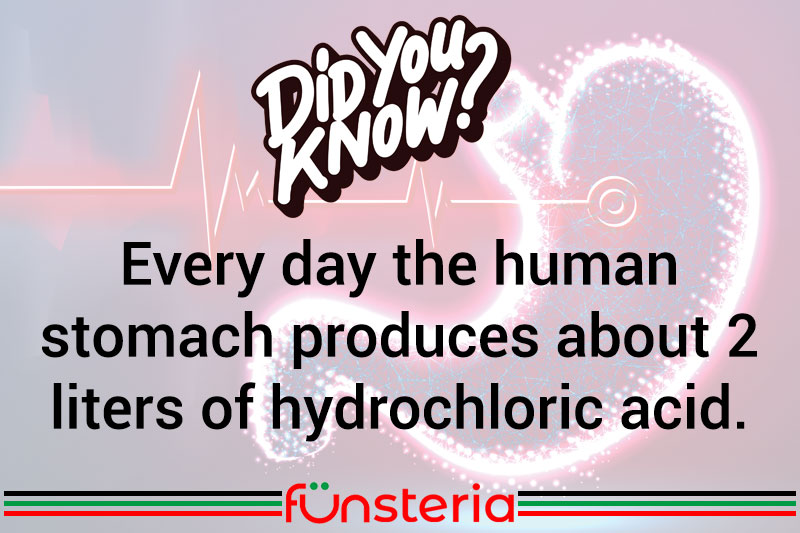 We may often complain of gas in the gut, but when one gas takes a liquid form, it becomes hydrochloric acid. And despite its enclosed shape, the stomach is literally full of it, because the human body produces an average of two liters of hydrochloric acid per day.

What is it and what are we doing with a potentially dangerous chemical in our belly? Surprisingly, it’s one of the oldest identified and utilized chemicals known to Man. Scientific records go back to the 9th century, and are greatly enlarged upon in the Middle Ages when its burning properties were employed by alchemists to try and create everything from the philosopher’s stone to the fountain of youth.

But it would have a more practical role by the 1800s, when it figured largely in the industrial revolution, becoming part of the process for making everything from PVC pipes to gelatin. Yet it goes back literally to the dawn of time, since Man crawled out of primordial ooze, grabbed something and ate it. Then got heartburn.

Thankfully, the burning properties of hydrochloric acid are counter-balanced by other substances in our body, or the human stomach really would need to be cast iron, and even that would be eroded. But we benefit from a system that ensures a good blood supply to the stomach, where the epithelial cells produce a mucous to coat the delicate lining, and also produces natural sodium bicarbonate. When these protective features fall down on the job, we end up with heartburn and ulcers, necessitating medications to inhibit the production of acid and neutralize what has already been produced.