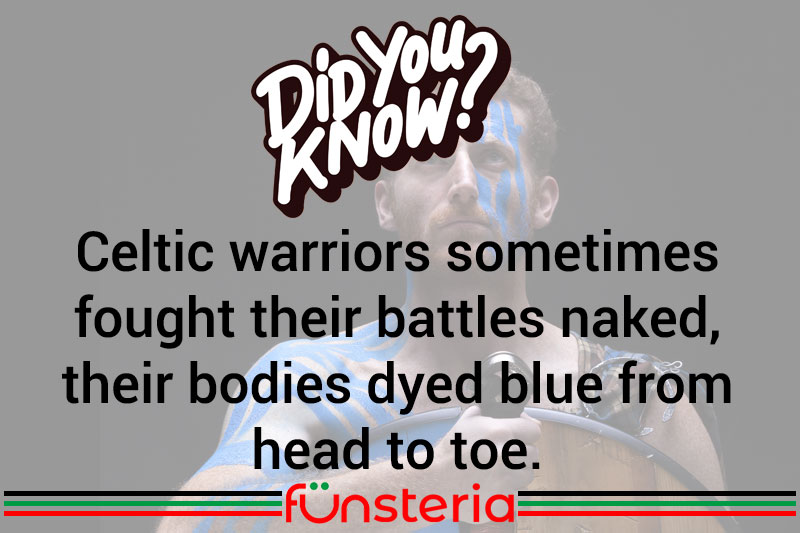 And who didn’t love those battle scenes in Braveheart, with the mad Celts pelting across the battlefield, kilts hiked above their knees, and in one memorable scene, tossed up over their tushes.

But those were the civilized years. Way back before that, prior to 300 B.C., Celtic warriors didn’t just flash bits of flesh, they showed it all. Because at that time, warriors shunned armor and preferred to fight in the “all together”. Except for their war paint, sword and a shield.

Warriors back then were real men, in every sense of the word. They existed solely to fight, and that was their only role in society. Freed men only served as chariot drivers. Known for their swordsmanship, there is evidence of the Celts battling in the buff, as late as 225B.C. at Telamon. Dionysius records the frightening sight of Celts advancing on their armies, swords whirling overhead and then slashing downwards.

Like any good warriors, the Celts liked their trophies. Most of the time, they took heads, hanging them from their horses, or displaying them outside of temples. This habit is one that shows up in art from the era, over and over. Even in 214B.C. a Roman general had to haul his freed slaves back into line on the battlefield, because they were busy collection trophies instead of fighting. Apparently they were captured Celts.

As time passed, Celts bowed to either common sense or jealousy, and in the time of the Greeks and Romans, the richer Celts or generals would don similar armor to their enemies. Such artifacts have been found in chieftains’ graves. Something else that has been found, gives rise to speculation whether the ancient Celts, unlike Mel Gibson’s rabble, who only streaked their faces with blue, didn’t fight in full body paint. What has been unearthed are remnants of skin that is clearly tattooed in blue. Other evidence of the color used in war comes from the times of Caesar, when he notes in his papers that the Brits wore skins dyed blue.