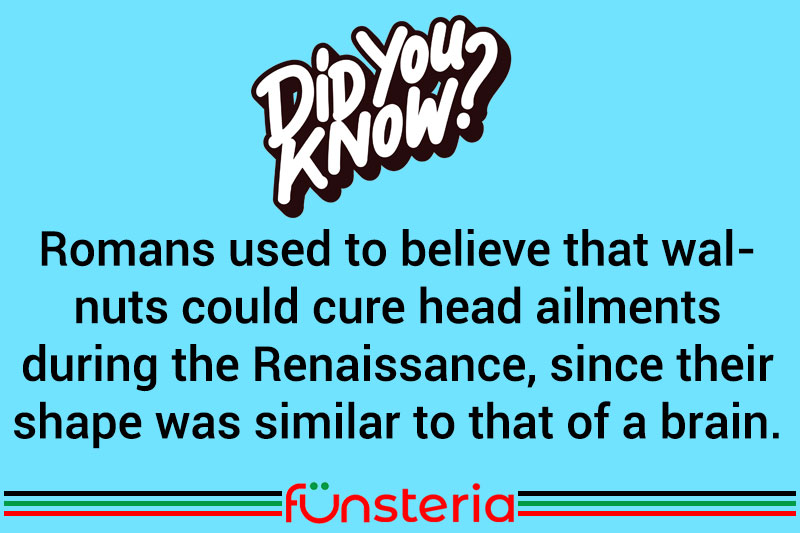 The Roman Doctrine of Signatures stated that whereas the meat of the walnut had the shape of a human brain, it would be useful in treating any ailments having to do with the head. Later in Medieval times, they were thought to cause headaches, also because of their shape.

The bigger the brain, the brighter? Not necessarily. Albert Einstein’s brain weighed only 1230 grams as opposed to the average for adult males, of 1400 grams. The heaviest human brain ever recorded, was 5 lbs. 1.1 oz.

A dolphin’s brain is structured so that only half sleeps at a time, allowing the alert half to maintain its breathing, and keep it surfacing for air.

The largest brain of a living creature, belongs to the sperm whale, whose intellectual center weighs a whopping 9kg. Or about 19.8lbs. The stegosaurus dinosaur, which could reach lengths of 30′, had a brain the size of a walnut.

The longest living cells in the body are brain cells, which can last a lifetime.

A human brain comprises only 2% of the body, yet it uses 20% of the oxygen and blood.

In the Sistine Chapel, Michaelangelo’s famed fresco of “The Creation” shows God reaching out to Adam against a background that mimics exactly, the shape of the human brain. The sulci match the brain stem, the basilar artery, the pituitary gland and the optic chiasm.