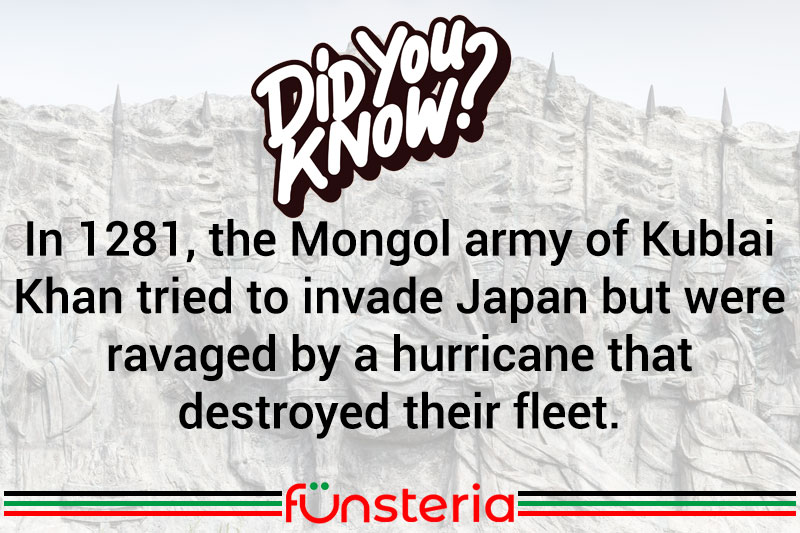 For thousands of years, eastern Asia was pretty much a place with cultural pockets, including China, Korea, and other countries, such as the island nation of Japan. Up until the mid-13th century, they were relatively isolated as far as social structures and conflicts were concerned. There had been no exchanges with central Europe, and Marco Polo was only just being born. Any struggles for borders, power, and riches, was amongst the countries themselves, with no one country ever truly gaining dominance over that end of the continent. Given the riches of the region, and the key benefits to overland and sea travel, it was a situation ripe for one or another territorial baron to overstep his boundaries. And along came Kublai Khan.

Before World War II, Kublai Khan would present the only true threat to Japan’s independence, when he set his sights on total rule of eastern Asia in the 1260s. By the time he ascended the Mongol throne, they already ruled China, Persia, Central Asia, Russia, and were extending their empire into the Middle East. But there was one jewel left in the east, and that was Japan.

In 1268A.D. Khan sent a letter to the emperor, demanding they submit to his rule and pay a tribute, or be invaded. Terrified by the Mongols, the emperor was inclined to give in, but the country was ruled by military power, and the army was not so ready to capitulate.

The Mongols set sail with 900 vessels carrying nearly 40,000 soldiers, in 1274A.D. Having overrun outlying islands, they then landed at Hakata Bay, and took on the main Japanese defense, who were no match for their numbers, or the explosive devices, which the Japanese had never seen. After a day of heavy fighting, they retreated to a fortress, and the Mongols retired to their ships in the bay, for the night.

But during the night, a huge storm arose, destroying some 200 ships along with over 13,000 of the Mongol soldiers. Decimated, the Mongols turned around, and sailed home. The Japanese were convinced that the Kamikaze (divine wind) had been sent by the gods.