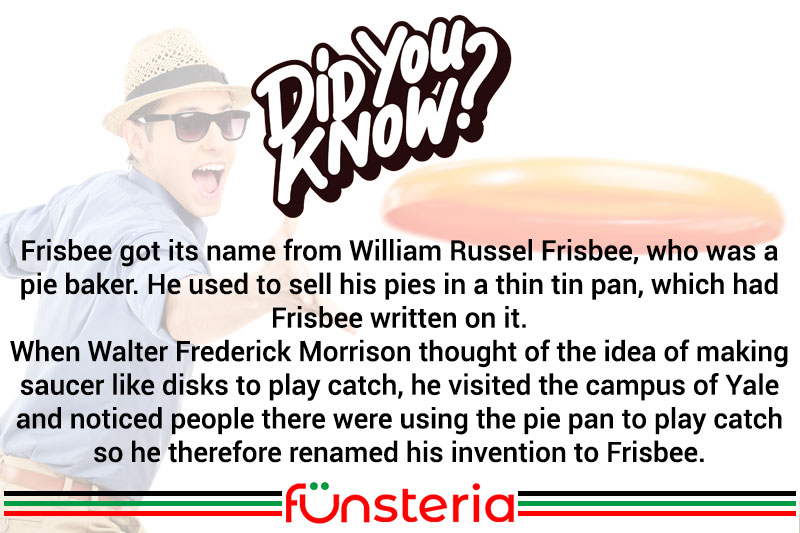 Does your dog like pie? Or is he just fond of the plate? Because one of the rages of the 50s, now a favorite canine toy for teaching owners to fetch, started out as nothing more than a humble pie plate.

Back in the 1870s, William Russel Frisbie was really rolling in dough, once he came up with a unique idea. Mr. Frisbie, a well- known baker in Warren, Connecticut, used to sell his pies in a thin, reusable tin plate. Then inspiration struck and it came to him that if he put his family name in raised lettering on the bottom of the pan, that housewives who went to use it would remember how good the original pie was, and go out to buy another, instead of slaving over a hot stove.

Did that mean the housewives then took their empty plates and whizzed them through the air? No. That phenomenon didn’t appear until the 1940s, when a flying saucer fanatic named Walter Frederick Morrison reproduced the flat, flying object as a disk that could be tossed with a snap of the wrist. He sold his idea to the Wham-o toy company, and during a nationwide tour during which they visited universities campuses, Wham-o demonstrated the joys of Morrison’s invention to the young and lively.

But they were way behind the times as he noted at Yale, where they were still tossing pie plates. Hence the company named their flying saucer for the plate, altering the spelling to Frisbee for copyright’s sake.