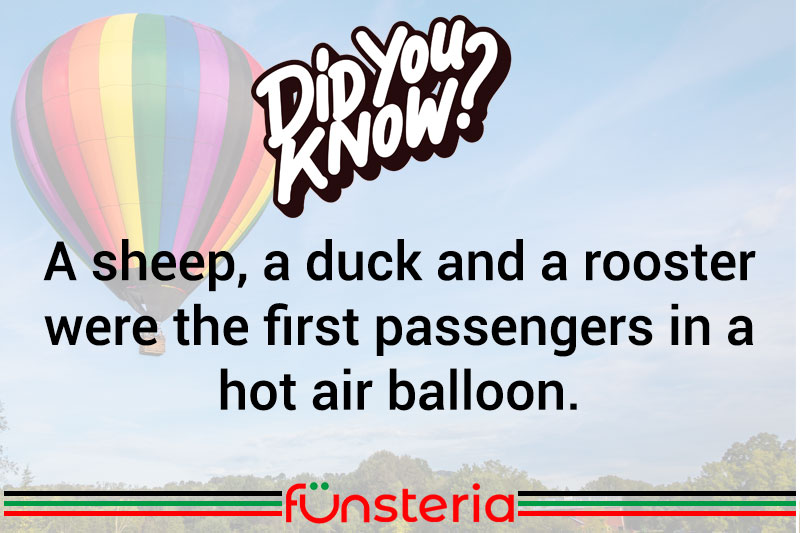 Did you hear the one about the sheep, the duck and the rooster? No, they didn’t go into a bar. They went into the first hot air balloon to carry living creatures into the air.

Man’s fascination with flight came to a head in the 18th century, with the full development of the hot air balloon. We say “full”, because others had projected the possibility of heat causing motion in air, including Leonardo da Vinci, but nobody had ever gone so far as to put theory into practice.

But the Montgolfier brothers, Joseph and Etienne, being French, were full of the joie de vivre of all inventors, and neither was terribly devoted to the paper business that had made their family so well off. Instead, somewhere in the 1770s, Joseph began tinkering with ideas that would fly.

His original inspiration was born out of the embers of a campfire, while watching particles wafting into the air, and dreaming of a way to drop troops onto Gibraltar by whatever laws of physics caused things to rise in the hot air over the flames.

He started off simply enough, with a thin wood box-shaped frame covered in taffeta, under which he lit a pile of papers. The “box” rose up and only fell when it hit the ceiling. Confident that he was onto something, Joseph recruited his brother Etienne, and only earned permission from their father to “neglect” the family business if they did not engage to fly themselves, no matter what they created.

Starting in 1782, they worked feverishly on various models made from a range of materials, with varying success. Some wafted aloft quite well and managed to travel several kilometers. But they had no control over the balloons, since there was nobody aboard. In fact, it is said that the King of France had forbidden human attempts to fly aloft until other living creatures had tried it. Willing or not.

So it was that on Sept.19, 1783, that the Montgolfiers attached a basket to their hot air balloon, and shepherded a sheep, and duck and a rooster into it. The balloon climbed to about 1500 feet, and traveled approximately two miles in eight minutes. The passengers were reportedly unharmed although deemed delicious at a later date.