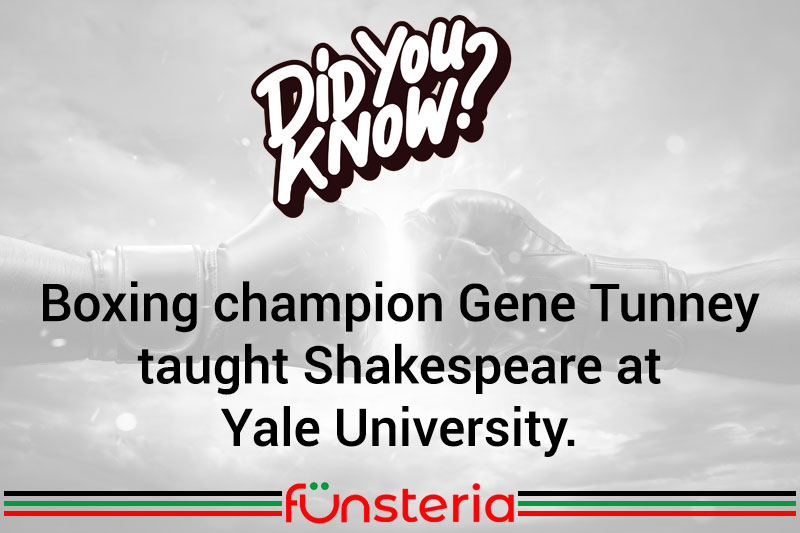 There was a time when the perception of boxers was…well, big lummoxes with fists, gloves, and not much above the neck. Sometimes that image was fostered by promoters, so nobody would get a real idea of how smart a fighter was, because smart outside the ring, translated to someone who could work all the angles, inside the ring. At other times it was true. And then there were the fighters like Gene Tunney, for whom reticence and modesty were ingrained from their earliest days, so that other than their public accomplishments, many facets of their life remained a surprise to friends and fans.

As a youngster, Tunney moved to Greenwich Village, where the local youngsters enjoyed a good brawl, all in good fun. Boxing was a popular sport, and Tunney proved himself not just adept, but superior in many ways. But when he dropped his fists, the fight was over and he not only managed to stay friends with the other boys, but went on to become something of a social organizer, always volunteering for activities that would keep his fellow students off the streets.

Part of Tunney’s character was due to his religious upbringing. His mother imbued him with a strong sense of responsibility for himself and others. In addition, Tunney had an insatiable thirst for knowledge. Even as a youngster, Tunney would borrow from the library of a local doctor, reading everything from biographies to Greek history.

Eventually he grew up and went off to WWI, where he served with distinction in the Marines. Tunney later became Heavyweight Boxing Champion of the world, with an enviable record of only ever losing one fight for the American Lightweight Title. He would later defeat the same boxer, Harry Greb, four times, on his way to earning the world title.

But what does a boxer do outside the ring? In Tunney’s case, he was tapped for Hollywood. Being a good looking man, a war hero, and a world boxing champion didn’t hurt. He went on to enjoy a fruitful life, and interesting pastimes that included playing golf. It was on the links that he met the late William Lyon Phelps, noted author and critic, who held a position in Yale University’s English department for 41 years. A known prankster, he invited Tunney to lecture. And he did, holding the packed house spellbound as he talked at length, without notes, on Shakespeare’s, “Troilus and Cressida”.