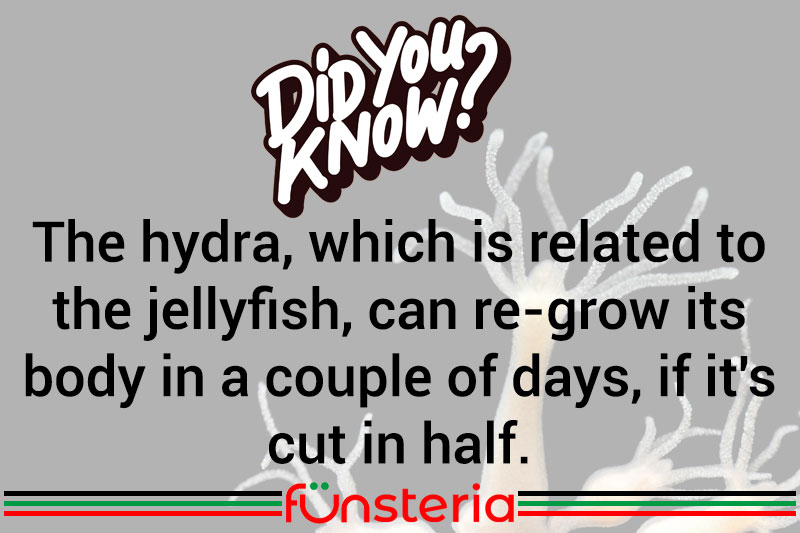 If familiar at all to the public, a hydra is a creature out of Greek mythology, a many-headed snakelike water creature that re-grows its heads when severed. Oddly enough, although the myth was born 2,000 years ago, there is a real hydra with similar properties, although it’s nowhere near the size nor nature of the myth.

A hydra is a simple, microscopic water life form, tube shaped, with a foot at one end, and a tiny mouth opening surrounded by tentacles at the other. In fact, the whole creature is tiny, measuring as little as 1/25th of an inch to 4/5ths of an inch. What makes it big news, is the fact that when cut in half, not only does the hydra continue to live, its two sections form into two new hydras.

In the 1800s, scientists who had managed to focus rudimentary microscopes on the hydra, theorized that if you pressed them against a material like cheesecloth, it would separate the creature into many sections which would then re-arrange themselves into a single hydra again. There are no actual records of this having been done, and it’s not an experiment that has been repeated successfully since that time. But in their suppositions, they were actually partially correct.

The cell structure of the hydra is such that a process called morphallaxis allows them to reorganize cells of tissue that already exists in the body as a whole. Thus, a hydra cut in two with a head on one section, re-grows a new foot, and the other section re-grows a new head, creating two separate hydras. This process is different from that of epimorphosis, in which an organism re-grows a limb or body part through cellular proliferation and differentiation.